Estimated Delivery Time is between Thursday 06 October and Monday 10 October.

Do you have trouble leveling the Ender-3 bed or keeping it leveled? Traditional 4-point leveling can actually deform the heated bed, causing it to bend and twist out of shape.

The Modular Ender 3 Y-Carriage Plate Upgrade corrects this problem. Using our unique bar design, an additional mounting point is created that makes 3-point leveling possible on the stock Ender 3 heated bed. It take far less time to level and will maintain a flat printing surface longer than before.

The Ender 3 Y-Carriage Plate Upgrade Kit is a drop-in replacement and includes all necessary hardware for the conversion. Please check Upgrade the Y-Carriage Plate for Ender 3 Guide for installation details.

The Ender-3 Y Carriage Plate provides a modular platform, where 3D printed attachments such as cameras, handle bars and more can be mounted. We have published several example designs that you can print right now. Based on the popular Ender-3 Bed Handle, this design has been adapted to fit the Modular Ender-3 Y Carriage Plate. The Handle Bar makes it easy to slide the heated bed while it's hot, preventing burns and other injuries during use.

Will save hours leveling bed. So much easier and flatter than stock.

I bought this a month or so ago and installed it immediately and I can say, without a doubt, this is my favorite upgrade so far. I love the 3 point bed leveling and it makes waaaaay more sense to have it this way. When I bought it, I also purchased some solid rubber bushings to replace my springs and I haven't had to level once since installation. I do check it every time I print and it's been great so far. I'm hoping to upgrade to an Ender 5 plus and I really hope they will have a y-carriage plate for that. To the Gulf team, keep up the good work! I can't wait to get more upgrades from you !

In my experience this does exactly what it claims to do. It works so well that I ditched my BL Touch because it became so easy to level the bed. I think it works particularly well in conjunction with the stronger bed springs to give you a bed that will hold its level for multiple prints without a problem. And to top it all off they have kept the price reasonable, in my opinion. I have two Ender 3's but i only installed this on one of them. But it works so well that I am going to buy another one for my other Ender. I was really skeptical that this would work, but I was completely mistaken.

I second the reviewer that declared that this might be the best upgrade in its price range for the Ender 3.

R
Robert Nixon
Maybe the best upgrade in its price range for the Ender 3 series.

This combined with Gulfcoast’s build plate is a great upgrade to the Ender 3 v2. Three-point leveling really is a much more intuitive way to level a plane. I leave the back left corner wheel alone, that’s my reference wheel and I only adjust it if I need to. Since I’ve got one fixed coordinate in 3D space handled, leveling becomes a matter of leveling across the Y-axis first by adjusting the front left wheel, and then leveling the X axis with the other knob and.... I’m done.

It takes me no time and all, and I can even afford to be a liiiiittle sloppy with the second adjustment thanks to klipper’s automatic gantry leveling functionality, which can also be used to compensate for a slight bed tilt across the x-axis.

I highly recommend this kind of leveling system in general, I share Gulfcoast Robotics’ enthusiasm about it after just a couple of days using it. 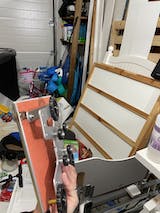 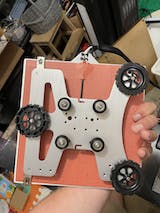 A
Anonymous
It was better than Cats.

So, I have a warped bed. I do. Three points did not fix that. I was pretty sure it wouldn't but I gave it a try. Five points and a tenacious tramming procedure did fix things though.

I print six "chips" (1mm thick rounder corner 25x25 squares). Four chips are centered over the leveling screws. One chip is dead center of the bed and the final chip is over the hard mount.

I use a micrometer to measure the thickness of each chip and determine the z-offset and total error from the hard-mount chip.

I divide by two to creep up on the z-offset.

I then calculate the degrees I need to turn each hand wheel to raise/lower the bed using:
degrees = ({measured Hard Mount thickness} - {measured corner thickness})*0.7*360

I can usually get my bed within 0.02mm from flat withing 3 or four attempts.

The added mount point from the new carriage gives me the ability to stress my warped bed about a fixed point to remove the warp.

As an aside I was able to get the three point system leveled in about a minute but the two unsupported corners would be out. I've had my bed on my surface plate also and know it is concave and sags by about 0.008" (approx 0.2mm). Since my bed is concave using the two screws normally removed for the three point carriage lets me "pull" the concave out.

All in all, I'm very happy with the investment.

Gulfcoast Robotics ships Monday through Friday, excluding holidays. The shipping cut-off time is 11 A.M. Eastern Standard. Orders placed after the cut-off time will be shipped the following business day. All orders are fulfilled by our warehouse located in North Port, Florida (US).

Domestic orders are shipped via USPS using the service selected at checkout. Parcels that exceed the First Class weight limit of 15.9 oz will automatically use Priority Mail. Once your package has been processed, a Tracking Number will be provided. The Shipping Confirmation is sent via e-mail and/or SMS alerts, depending on the contact information specified at checkout.

All orders shipped to a destination outside of the United States are subject to the import duties, fees and taxes of the destination country. Delays in delivery may occur if your package is randomly selected by the Customs Department for inspection.We have no control over the process or additional charges associated with the delivery and important of your package into your country. We do not benefit in anyway from these charges and work closely with our carriers to ensure as few delays as possible.We are not responsible for any duties, fees, or taxes that are incurred during the delivery of your order/package.

What are you looking for?